How did people travel in 1900 from US to Europe?

Etias Immigration
Traveling was not always as secure and carried such low risk as today. We will be looking at how people traveled from the United States to Europe from 1900 to 1950.
Get notified
Table of Contents

Transportation can be found everywhere in the United States of America. Transport is essential to our lives, getting from point A to point B, crossing the states, and even other countries.

Transportation in the 1900s or at least in the beginning of the century was mainly limited to horsepower and slow-moving trains. Still, now with the invention and advancement of automobiles, planes, trains, and boats, the vehicle has become much easier to use for long distances. This can be seen by the fact that there are now highways, roads, and airports in many parts of the world.

The System has improved to the point where ETIAS visa will become a central part of transportation internationally. It will help ensure the safety and the security of the country visited, supporting the fight against terrorism and other illegal, fraudulent activities. However, traveling was not always as secure and carried such low risk as today. This article will be looking at how people traveled from 1900 to 1950.

Transportation in the 1900s: Traveling from the USA to Europe 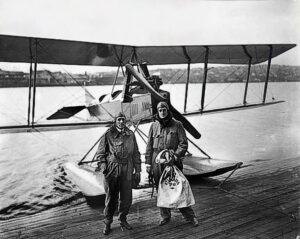 It was all about horse-and-carriage transport in the 1900s. Before the introduction of automobiles, the horse-pulled carriage was the most common means of transportation.

Because roads were scarce in the early 1900s, most visitors relied on waterways (mainly rivers) to get to their destinations.

The 1900s was the last decade until roads, canals, and railroad systems took off in the United States. This period represented a considerably slower and more ancient mode of transportation than the traditions we connect with the rest of the twentieth century.

In the 1910s, the steamship was the only means to travel to Europe. The Titanic was, of course, the most renowned ocean liner of the decade.

The Titanic, the giant ship that was supposed to act as a means of transport from Europe to the United States of America, set sail from Southampton, England, on the 10th of April and was scheduled to reach New York City on the 17th of April.

It crashed into an iceberg at 11:40 p.m. on the 14th of April and sank three hours later in the North Atlantic.

Even when the ship was built, it was the world’s most extensive hand-made means of transport and the pinnacle of 1910s travel.

The Roaring Twenties introduced us to the beauty and adventure of travel. During World War II, railroads in the United States were enlarged, and travelers were urged to take the train to travel to out-of-state resorts.

It was also a prosperous and prosperous decade, and it was the first time that middle-class families could buy one of the essential travel luxuries: an automobile.

Even while improved train travel goes back to the 18th century when George Pullman developed the idea of private train cars, luxury trains were introduced in the 20s in Europe, owing to the design splendor of La Belle Epoque.

Finally, after the problems of 1912, ocean liners gained such prominence that the Suez Canal was widened. Travelers would primarily cruise to places like the Bahamas and Jamaica.

We arrived in the 1930s when airplanes first entered the mainstream travel landscape. While the Wright brothers invented the plane in 1903 and commercial airlines became available in the 1920s, flying was a confined, unstable experience restricted only to the wealthiest segments of society.

Flying in the 1930s was a little more comfortable (though still reserved for the wealthy and business travelers). Flight cabins grew, and seats became more luxurious, mimicking living room furniture.

The Douglas DC-3, which debuted in 1935, was a commercial airplane that was bigger, more pleasant, and quicker than anything else travelers had seen. TWA, Delta, United, and American were among the airlines that used the Douglas DC-3.

The 1930s also marked the beginning of trans-Atlantic flights. Pan American Airways was the first airline to ferry passengers over the Atlantic, starting commercial flights in 1939.

The era of road trips started in the 1940s when automobiles improved. Cars were growing larger, higher-tech, and more luxurious, from luxury vehicles to some well-made family station wagons.

President Eisenhower introduced the Interstate system in the 1950s.

Before the creation of the “I” roads, travelers could only travel across the country on the Lincoln Highway (Which was built and let you travel from New York City to San Francisco).

However, the Lincoln Highway wasn’t a comfortable ride, with parts of it being unpaved, which is one of the causes the Interstate system was created.

President Eisenhower was under a lot of pressure from his supporters to upgrade the roads, so he did so in the 1950s, opening the way for more comfortable commutes and road trips.

What is ETIAS? – Infographic

ETIAS is the new travel authorization system for European Union. The new European Travel Information and Authorization System will go into effect in November 2023. This visa waiver will affect 60 countries that currently have a visa-free travel agreement within the Schengen zone.

How Does the Hotspot System Work in the EU’s External Borders?

All the countries felons can visit with or without travel restrictions

If you've been convicted in the past of any crime, your chances of moving to another country may be limited. Here's the list of the countries felons can visit and the ways to overcome the travel difficulties associated with a felony.

We recommend that the user examine this policy frequently because it may be updated due to new regulations or business reasons.

Why do we utilize cookies, and what are they?

“Cookies” are file formats that are used for various reasons, including adjusting the Website’s format to your computer, gathering statistical data, enhancing your user experience, and so on.

You consent to the establishment of cookies by visiting and browsing this Website and purchasing the services offered.

Please be aware that if you modify your browser’s settings by deactivating the constraints placed on installing cookies, we will presume you give us your permission. Furthermore, your consent will not be necessary if the placement of cookies is essential to provide a service on our Website that you have specifically requested.

The following cookie types may be installed in your browser by us:

What choices does the user have when it comes to blocking or refusing cookies?

You can withhold your consent to the set-up of cookies from this Website at any time by changing the settings on your device’s browser.

For the most popular internet browsers, here are links to instructions on how to manage or erase cookies:

You may also set your smartphone’s browser to allow or reject all types of cookies automatically. You can also set your browser to inform you whenever a cookie is received, allowing you to choose whether or not to accept it.